The beauty of Kumbolo Lake at the foot of Mount Semeru

The beauty of Kumbolo Lake at the foot of Mount Semeru East Java as one of the best places for climbing and camping tours.

Semeru volcano, East Java is a mountain that has a million beauty stored in it. And this is what makes travelers, especially those who have a hobby of climbing mountains, make Semeru the number one tourist attraction in East Java. Many visitors come to Mount Semeru because of its uniqueness and natural beauty. 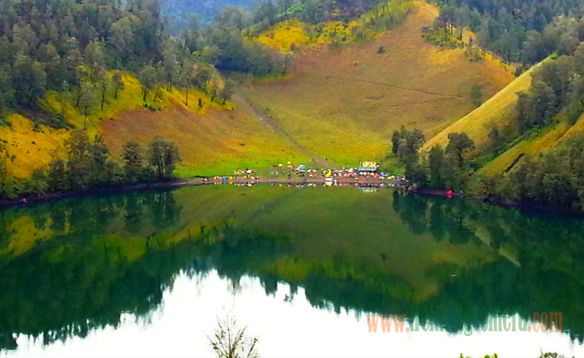 Kumbolo Lake at the foot of Mount Semeru

Mount Semeru, which has an altitude of 3,676 meters above sea level, but who would have thought on the slopes of Mount Semeru there is a beautiful lake as a place to stop by camping while climbing to the top of Mount Semeru.

Ranu Kumbolo Tourism Object is known for the hidden paradise at the foot of the mountain semeru, the beauty of which is owned by ranu kumbolo make the climber charmed when he saw the beauty of this lake. Ranu Kumbolo is the first destination for climbers to be able to conquer Mahameru peak which has a height of 3676 Mdpl with a temperature of 7 ° -10 ° Celsius. Of course you can imagine the struggle to achieve it is not easy and filled with a fight.

Ranu Kumbolo Tourist attraction is known for its beauty, therefore it is not uncommon the climber to make this place as a tourist attraction that is very unique because it provides an amazing scenery that ever existed in Indonesia. Kumbolo Lake is also not rarely used as a place of rest by climbers who feel exhausted Mount Semeru Climbing and want to relax his body while looking at the scenery is very beautiful.

Did you know that behind the beauty of the lake Ranu Kumbolo has a legend that not many people know, according to the story of local people told that in this lake has some mystery that was quite scary. It is said that in this lake when the full moon arrives a gadi with long hair will appear, this girl is believed to be the watcher of lake Ranu Kumbolo known for its beauty. Lots of mysteries are stored in this lake Kumbolo like the other again the death of one of the new bride who was dragged by the current from this lake. The dead bride died after burning incense and gave some offerings to Ranu Kumbolo lake guard. After giving and burning the offerings, the two newlyweds had the intention of cleansing themselves into the lake but the unfortunate fate of the bride who whilst while washing away, the bride was dragged down by the current from Ranu Kumbolo lake and drowned, but a few hours later her body floated . Of course this is to be a very strange phenomenon, because it is possible in a lake that has a calm stream, has a strong current that can even carry people away.

The Beauty of Kumbolo Lake in Mount Semeru

That’s the story of the mystery of Lake Kumbolo, but it should not make us afraid to visit that place, it all depends on our belief. Because we are the ones who determine what we see and experience. Therefore do not make Ranu Kumbolo Tourism Object as a haunted place because this lake is very beautiful, and do not pollute this place. Because this is the legacy of Indonesia that we have to keep its beauty. If climbing the summit of Mount Semeru is too heavy for you, Ranu Kumbolo can be an alternative for camping and enjoying the beauty of the night sky called the Milky Way galaxy. See more here Ranu Kumbolo Lake Camping Tour for Milky Way Photography